You may remember reading about Colton Harris-Moore, aka the Barefoot Bandit. Colton was a semi-local teen who managed to outrun the law for a really long time. He got caught, and now he's in jail. Now I understand that crime is bad and all the jazz, but I really really became captivated by his story. The same way I was captivated by the Ruby Ridge fiasco. Speaking of which, Jess Walter wrote an amazing book all about Randy Weaver and what went down at Ruby Ridge (shame, shame Idaho). I highly recommend you check it out. The book is called Ruby Ridge, but the original title was Every Knee Shall Bow which is just soooooo much better, but it was changed later on. I really do prefer the original title, but that's neither here nor there. Jess Walter =  good. Bob Friel = really bad.


Who is Bob Friel? Oh just the guy that wrote THE BAREFOOT BANDIT: The True Tale of Colton Harris-Moore, New American Outlaw. Cue disappointment! It's so bad!!! I read the first 4 chapters and I had to put it down. I was giddy when I got the email saying my book hold had arrived at the local library. GIDDY. After twenty minutes I knew I wouldn't make it through all 500 plus pages. I mean would you... 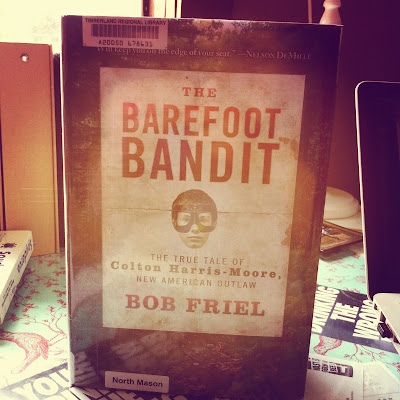 "After nearly four hours, the alternately thrilling and terrifying flight was over and the pilot's heart was still beating. He'd started the morning as Colton Harris-Moore, trailer-bred juvenile delinquent and petty thief. When he popped open the door of that stolen Cessna, though, and stepped into the wilds of Washington State haunted by the legends of Sasquatch, D.B. Cooper, Twin Peaks, and Twilight, he became Colt, the new millennium's ballsiest outlaw.
Move over Bigfoot, meet Barefoot."

I even kept reading after that paragraph. I did stop a few pages later when the chapter started with,
"Meanwhile, back on the Wild West's watery frontier, the residents of Orcas Island woke on November 12 to a big breakfast of WTF?"

I just couldn't take anymore. I'll have to wait until Colton gets out of jail and decides to write his own book.