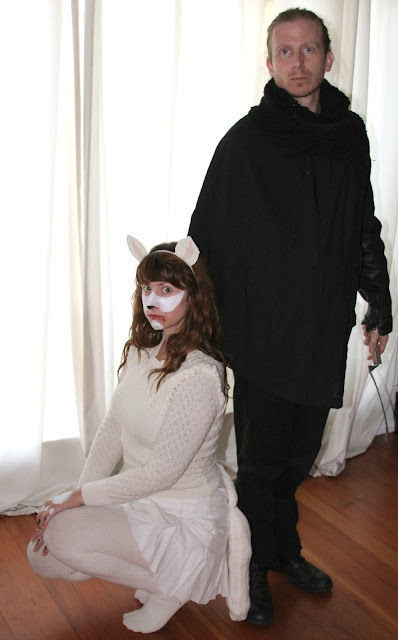 Halloween is quickly approaching and year after year I ask Ben if we can do a couples costume, and year after year we throw something together at the last minute. Usually it turns out really amazing, but never has it been a good couples costume. So this year I find myself, yet again, in the same dilemma...but I thought of a way to get some mileage out of him yet: force him to dress up with me for a blog post! And even though it's not Halloween, this weekend, for a little while at least, he was the Jon Snow to my Ghost. Anyway, here's how this easy DIY costume was done...

For those of you who haven't jumped on the Game of Thrones emotional roller coaster, you really should. I am currently on the third book of the series, A Storm of Sword, and am loving it. A huge draw is that in the first book/season (it's also a series on HBO) a lovely bunch of orphaned dire wolves are discovered and turn out to be much more than just unusual pets. I am inclined to latch onto this due to the love I have for my Olive.

First off, I should mention that this is a really great (and easy) idea provided you have two crucial items: black clothing and white clothing. (Naturally because Jon Snow must wear all black as a brother of the Nights Watch, and Ghost is an albino dire wolf.) If you can say yes to this requirement: great! Then this could be the year you have a relatively free Jon Snow and Ghost Halloween costume! You better go raid your closet. 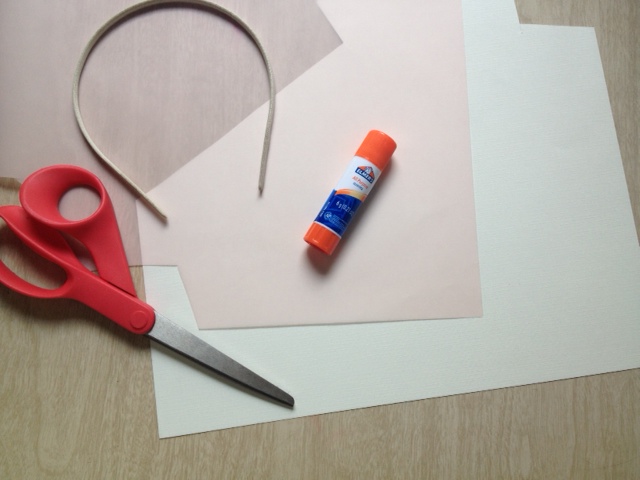 For the ears you will need a headband, paper, scissors, glue stick, and tape. 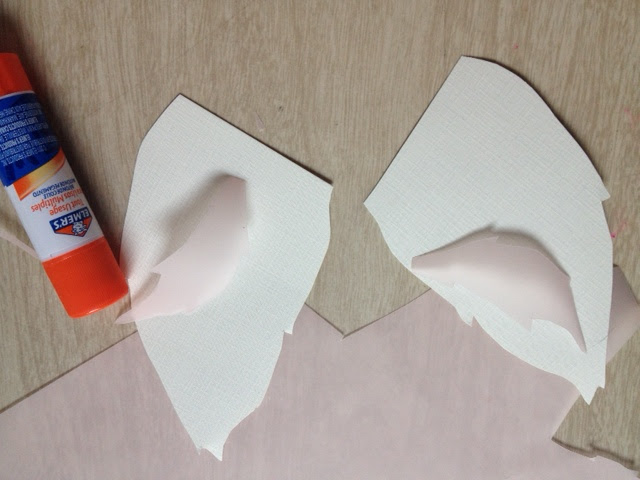 Pretty basic idea--just cut out the wolf ears, glue them and tape them to the headband.
I had some issues not making them look like bunny ears. Please don't judge too harshly. 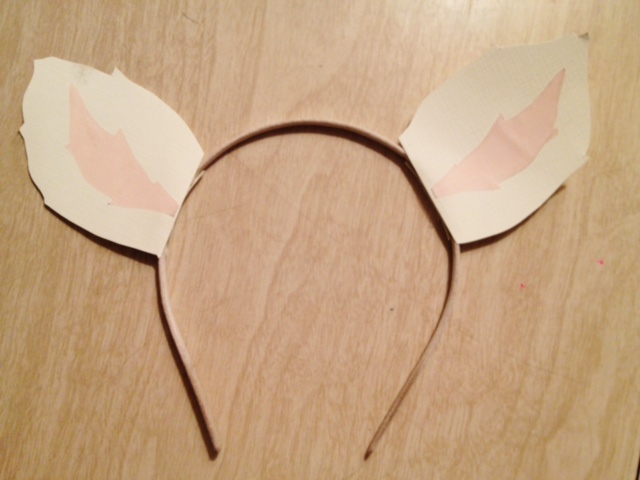 Sorry for the drastic change in lighting, but it's obviously intentional in order to distract you from
how this could easily also be a Bunnicula costume with those ears. 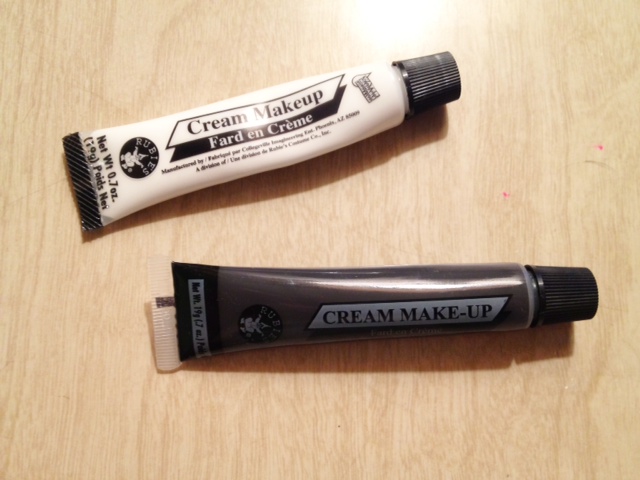 You'll also need some cream makeup. You guessed it, black and white.
These tubes are at Target for a dollar each, not too shabby. 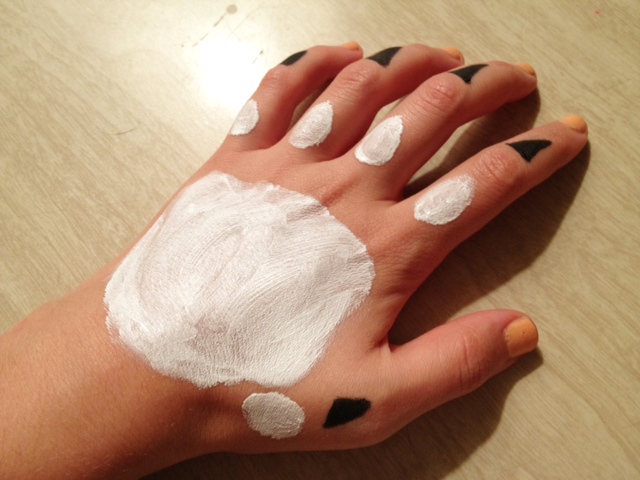 You can take the face/body painting to a very dramatic place, but I choose to keep it relatively simple and just did my cheeks, nose, and chin. But don't forget your paws and your claws...you have to protect your Jon Snow from all the Wildlings.
﻿ 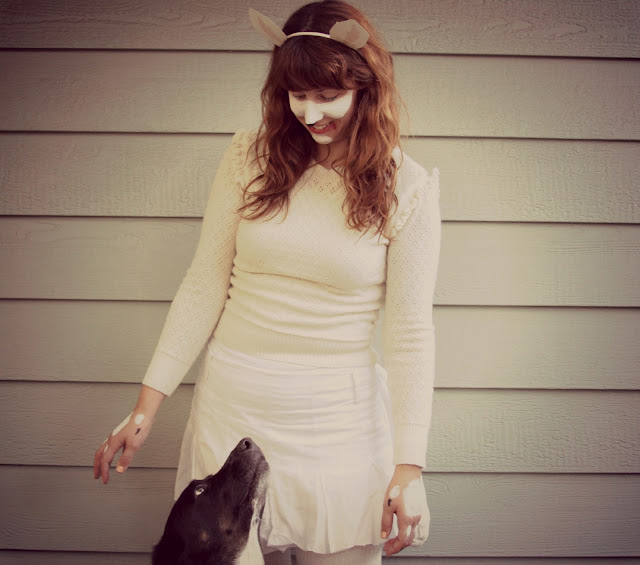 Most importantly play with the interested puppy or she'll never forgive you. 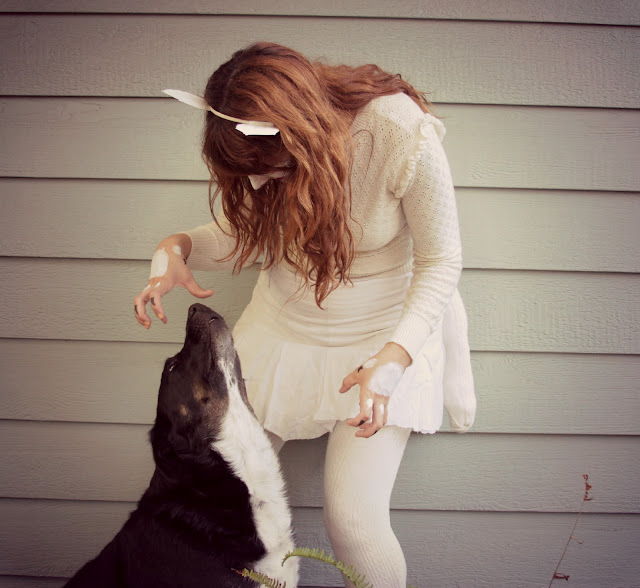 And last I will leave you with a very Halloween appropriate picture of some dire wolf skulls that were found in the La Brea Tar Pits in Los Angeles. If you're ever in the area, you should go check it out, as it's a sight to behold...maybe you could even go dressed up as a dire wolf?﻿ 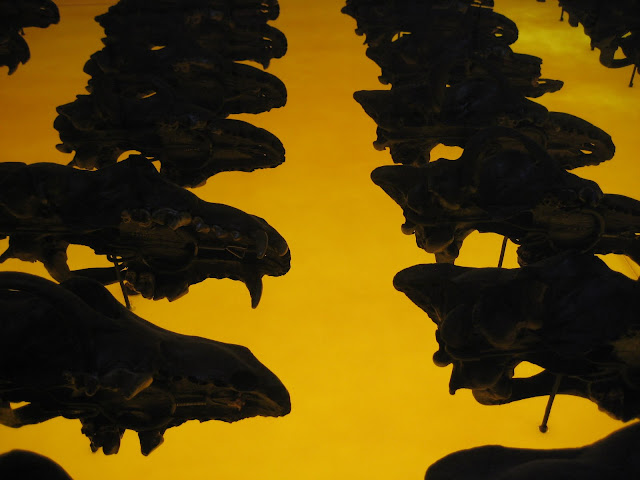 Need a few other DIY costume ideas? Why not go as a volcano, a snazzy skeleton, or a fantastic fox?
Posted by Monika at 8:00 AM